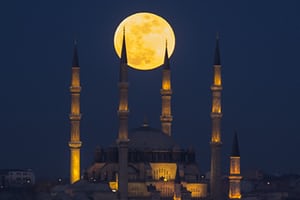 A Blue Moon lit up the night skies across Turkey and beyond on Feb 1st night during a rare celestial event that saw a super moon, blue moon and blood moon coincide with a total lunar eclipse. The “giant blue moon” is formed by meeting three astronomical phenomena together, the first being the second moon in one solar month, the so-called “blue moon”, and the second occurring at the nearest point of the earth, making it appear larger. Description of “Giant”. And finally, the occurrence of the earth between him and the sun, with the leakage of radiation from it from the vicinity of the earth, which earns the color red.

The phenomenon occurred last time in 1866, and is expected to occur in the future after 152 years.

A full moon, when the Moon is completely illuminated by the Sun’s rays, occurs every 29.5 days and occurs when Earth is directly aligned between the Sun and the Moon.

February will be a full moon-less month after the double excitement of January, which saw two super moons on January 1 and January 31.

Because February, at 28 or 29 days, is shorter than the lunar cycle, the month sometimes skips the cyclical full moon. The last time this happened was in 1999 and only occurs four times in a century.

However, the rest of 2018 looks set to make up for the four-week wait with a whole host of incredible celestial events to look forward to, according to NASA and Space.com.